Building A New Movement Against Racism and Police Terror 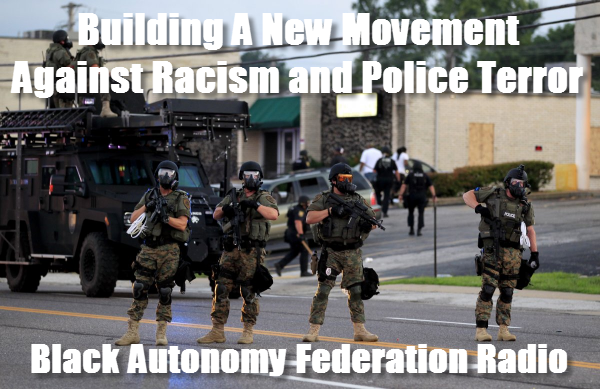 At least 2,337 people—a large number of whom were black and poor--have been killed by law enforcement officers in America since the beginning of 2009. The police are hired guns, a corrupt, out-of-control, murderous, military occupying army. They are recruited by the government to beat and kill poor and working class people who dare to demand their rights and begin to organize to dismantle the system that was created by the government to oppress them, or just Black people murdered by racist in the cases of modern day legal lynchings. Yet, too many people in the black community believe the lie that if they “work with the police,” this will stop crime in our community. Nothing could be further from the truth since it is the government which is responsible for the poverty and desperation which breeds crime in the first place. Join us for a discussion on Black Autonomy Federation Radio about building a new grassroots, anti-racist/anti-cop movement and an organized resistance struggle to stop racist police terror.
Posted by SReid at 11:16 PM