Black People Have A Right To Rebel 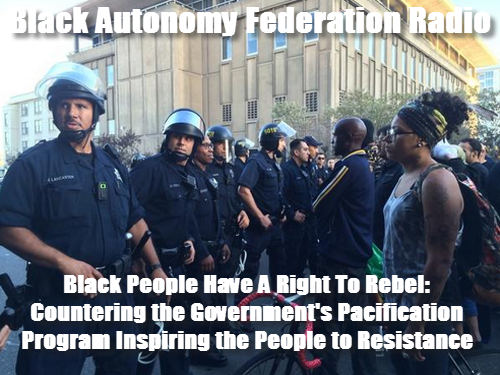 Black People Have A Right To Rebel: Countering the Government’s Pacification Program Inspiring the People to Resistance. The recent rebellion over police terrorism in Ferguson, Missouri, was both a militant protest against the racist police murder of 18-year old Michael Brown Jr. by a white cop, and an act of anti-government insurrection. In response, the government threw an army of cops with military weapons at a mass of civilian resisters.

The government and its pacification agents led by Barack Obama and his proxy, Al Sharpton, tell us that we should not fight in the streets and that the cops are somehow in our communities to protect us. We must reject such calls and spread the rebellious resistance exhibited in Ferguson to other cities all over the USA. Further, we must reject pacifism as an ideology of defeat, surrender and compromise, and call upon black youth and their allies to keep fighting and step it up to armed self-defense.

In fact, we call upon them to build armed self-defense units in neighborhoods in all the cities and towns of America until we have a broad-based Black Partisan Militia as a people’s army. Join us this week on Black Autonomy Federation Radio for a discussion on issues of self-defense and a new protest and resistance movement.
Posted by SReid at 10:26 PM