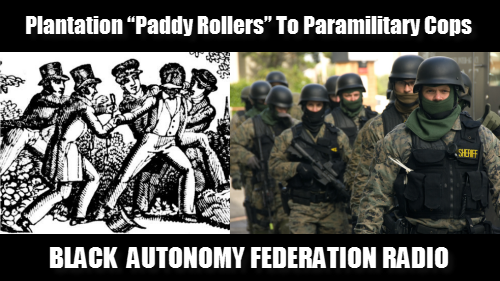 During the enslavement of Africans in America, private armies of southern white men formed slave patrols, who were charged with stopping the many revolts that took place on plantations. These so-called “paddy rollers,” who also captured and returned runaway slaves to their owners, were the precursor to the modern police departments in America. After the Civil War, paddy rollers evolved into modern police departments. In the South, these cops became key enforcers of the new Jim Crow laws that were passed to strip the freed slaves of their civil and human rights.

During the Civil Rights Era, southern police brutally beat and killed civil rights organizers. In other parts of the USA, urban police used paramilitary police teams (SWAT) to attack the offices of the Black Panther Party and other radical tendencies during the 1960’s and 1970’s.

Now, we have racial profiling, no-knock raids, and paramilitary policing, which were put in place for the last 35 years, purportedly to combat crack cocaine and drug dealing gangs. It was later discovered that the government itself helped drugs flow into the black community as part of a chemical warfare program. Paramilitary policing has cost the lives of tens of thousands and put millions in prison. The War on Drugs has destroyed many viable black neighborhoods, threatening the civil liberties of all people in the USA.
Posted by SReid at 2:21 AM